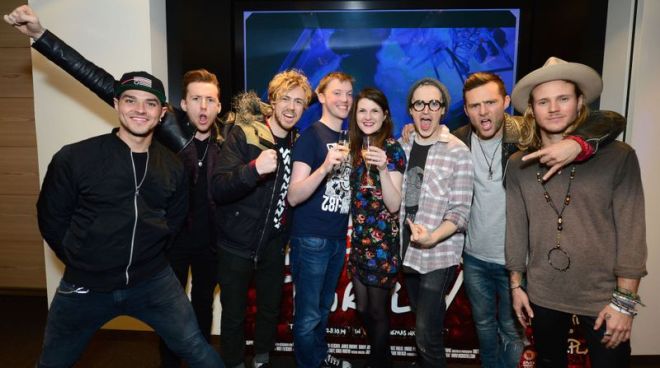 McFly are back. So is I’m a Celebrity. And I couldn’t be happier about both.

Ten years ago, I wouldn’t have expected those to be two of the highlights of my 2020. But a lot changed around nine years ago…

End of the World

I was stuck in a job I hated but had no idea how to leave. Weekdays were a write-off. Saturdays were spent recovering from the weekdays. And Sundays were spent dreading Mondays.

(I thought I did a really good job of hiding how miserable I was, but when I did eventually leave that job (*spoiler alert*) my dad almost broke my heart by saying “this is the first time I’ve seen you smile for two years”. So… yeah, really not great.)

But in that time there was one really bright moment – I moved in with a girl.

This girl was something special. And she was also a McFly fan.

Now I’ll admit, I didn’t know much about McFly. I knew of them, of course – I was a teenager in the 00s. But I knew a few songs, the Queen cover and… that was it, really.

But this girl was a fan. Hell, she was a superfan. Every album. Every single. About ten gigs under her belt.

So I decided to upload all of her McFly CDs onto my iPod (both of which were pretty obsolete tech even in 2011, but hey).

Listening to those albums transformed my commute. Instead of focusing on the bad, it gave me something… good. Something fun. Something happy.

Then at the end of the year, Dougie from the band was going onto I’m a Celebrity. I’d never watched before, but of course the superfan I was living with was going to watch, so I might as well give it a go…

Suddenly my evenings were transformed. I had something to make my commute bearable. Something to do in the evenings that wasn’t just thinking about the next morning.

And it was such a relief.

So, at this point in my life, I decided two things:

I’ll Be Your Man

The band meant so much to her. To both of us now.

And I started to realise that I actually do have some skills. Some talent. Some value.

Maybe… maybe I could make the McFly thing happen?

At this point they were doing the McBusted tour (and what do you know, that girl was a Busted superfan too. Like owning-German-only-releases-of-singles-that-she-bought-off-ebay levels of superfan.

I had no ‘in’. I didn’t know anyone who worked with the band, or even in the music industry. But it was worth a shot.

So I started trying. Really trying. I was researching potential leads, contacting random people who might be able to help. Using all my (very, very limited) charm and charisma to try and make the impossible happen.

Then one day I noticed a missed call on my mobile. I check my voicemail.

“Hi, Craig? This is McBusted’s tour manager. Can you give me a call back?”

Long story short, the next day my girlfriend and her friend are at a private screening for the McBusted DVD. The band are onstage taking questions. And I’m (as far as she knows) safely at home, probably tucking into a pizza.

The band are almost done. They get up to leave.

“Oh, actually we’ve got time for one more question…”

I come out onto the stage.

The girl stays in her chair, too shocked to come down.

She finally joins me.

I get down on one knee.

She runs off to hug the band, practically before I’m on my feet again. (She still says that she got two hugs off each of them, and kisses off two of them. I’m pretty sure I can guess the two).

And that’s how my engagement ended up being the number one story on Heat World’s website.

A couple of years later, we got married (with the tables at the wedding breakfast named after McFly songs, of course).

Now it’s a few years later still. We’ve got our own little Galaxy Defender, and we sing McFly songs to her on an almost daily basis (occasionally with some with slightly modified lyrics).

The first song our daughter ever heard on the radio? Happiness.

So when it comes to McFly, they’ll always be the band that managed to fill me with joy even at one of the lowest parts of my life. Plus they continue to add moments of magic even in these brighter days.

And it takes a special kind of band to be able to do that.

If you went back and told 2011 me all of that would happen, I think he’d be pretty OK with his lot.